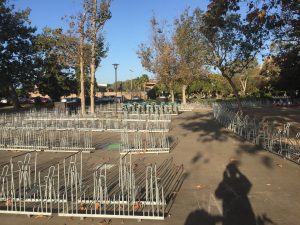 The library is one of the most visited areas of campus, and nearby lots are consistently crowded. This upgrade increases the amount of available parking for the library, Arbor, and surrounding buildings. 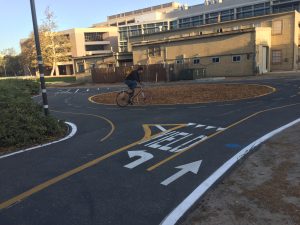 The circle has been repainted with fresh markings that more clearly show where to position yourself as you enter and exit the circle. 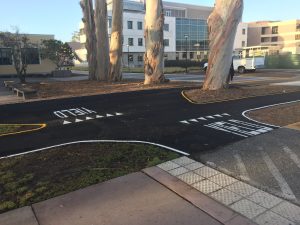 The path crossing areas have been repainted to more clearly show where to position yourself and who has the right of way when crossing the path. 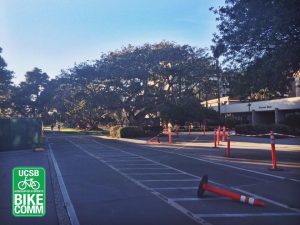 The bike path along Girvetz and Music Buildings had been lifted in some areas by tree roots, which made the lower areas flood during even mild rain. We smoothed out the whole path and improved drainage so the path is safe throughout the rainy season. 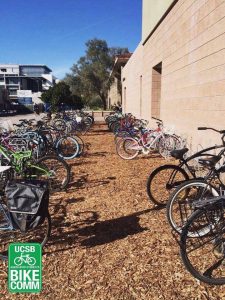 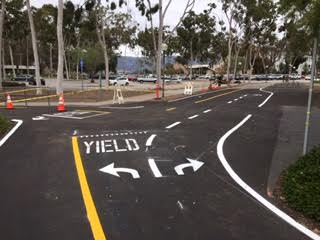 Due to the confusion many student faced when riding their bike through the intersection, we decided to redesign the striping to better indicate the yield and turning signs. Installation took place during 2016 winter break. 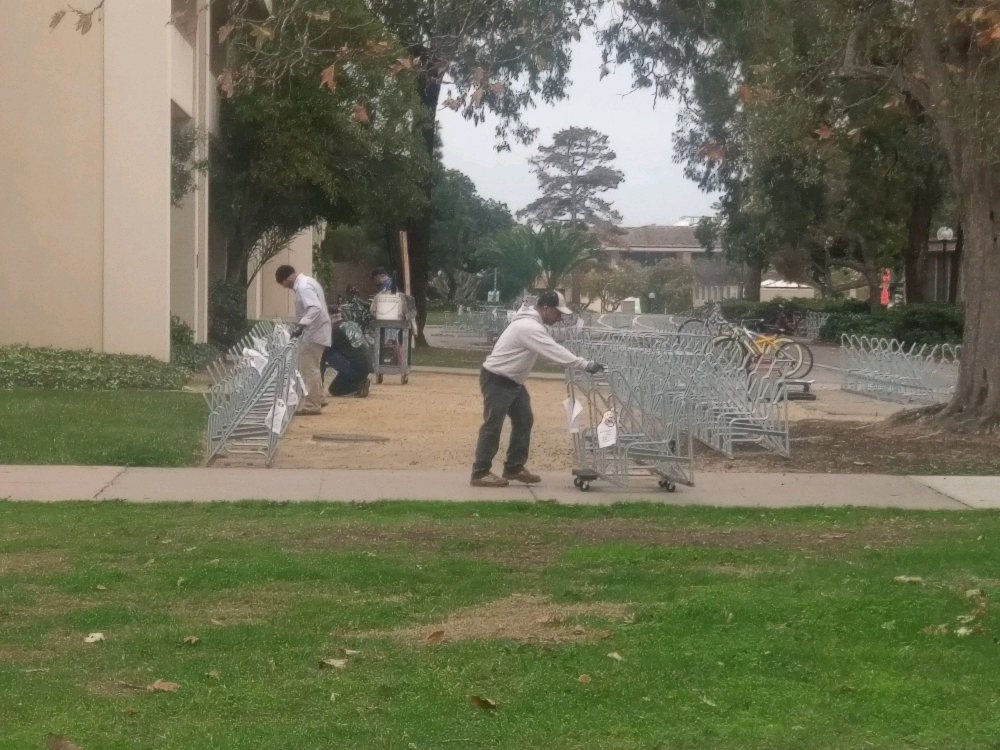 As many of students already know, the struggle of finding bike parking near the Arbor is real. In the past there have been many measures to better the South Hall parking problem ranging from CSO enforcement, parking lot detour, new parking lot behind Kern Hall, and installing signs. We installed a new parking lot in order to divert the parking from the crowded parking lot near the Arbor.

In addition to the NW corner of South Hall, we decided to install an additional 144 parking spaces on the west side of South Hall. The cost of this parking lot amounts to $17,326.72. Installation took place during 2016 winter break.

We noticed that many bikes were not properly locked in front of the Life Science building due to the half moon shaped racks that are not well suited for bike parking. We decided to install new bike racks call Peak Racks, the most densest bike racks manufactured in California. The cost is to $17,392.72 of student fees. Installation took place during 2016 winter break.

We noticed that not that many bike are parked in the interior area of the lot due to the racks being half moon shaped. We decided to take out the half moon racks and install 118 Peak Rack spaces. The cost is $12,106.95 of student fees. Installation took place during 2016 winter break. 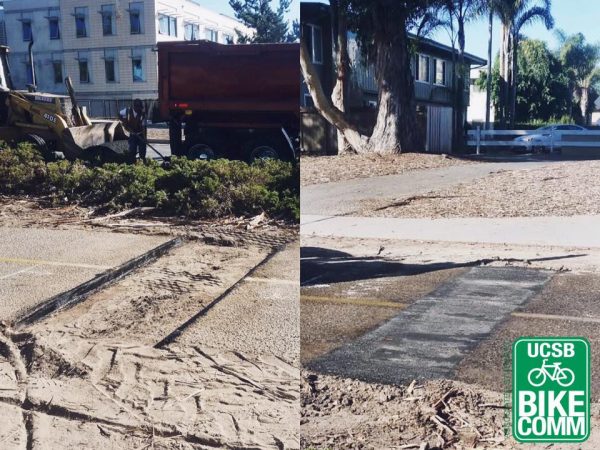 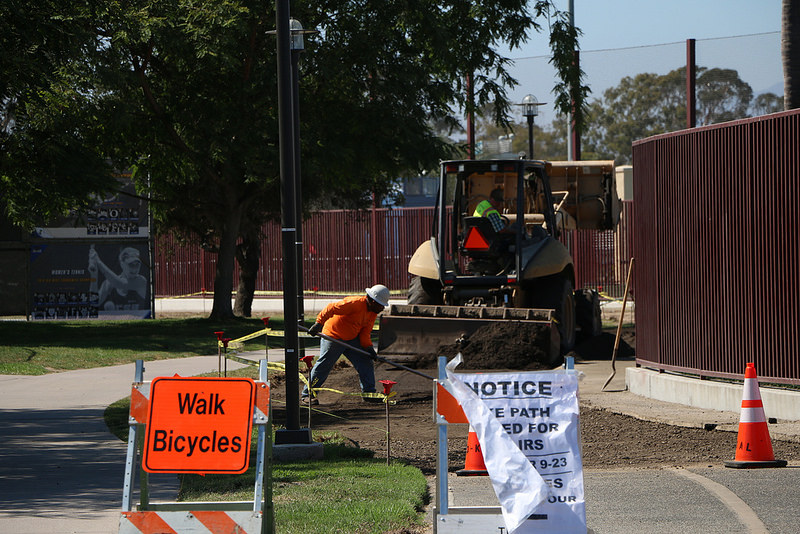 The Sand Volleyball Courts bike path was part of the early bike paths that have not been renovated since. We repaved and widened the path to make it safer coming to and from campus. 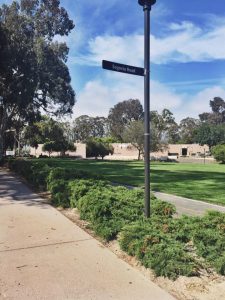 Along the outskirts of campus to Isla Vista there are numerous turn-offs to get there. When biking, we noticed how it was difficult to maneuver where to go if there were no street signs. We have added these for your safety and convenience to better find your way to and from campus. 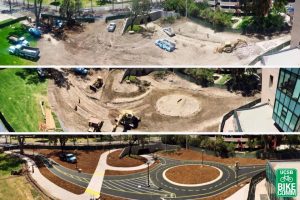 The Pardall pathway leading in to campus now has an added intersection in front of HSSB. This newly added intersection has helped traffic flow thus increasing safety on the pathway. It has also enhanced the aesthetics of the area, preventing bikers from feeling obligated to bike through the grass in order to reach their destination. The vast lot catering to the students who frequent Campbell hall was recently numbered, enabling students to locate their bikes easily before and after class.

Kerr Hall is one of the most demanding parking areas on campus. Although it has around 180 spaces, during peak hours, it is likely these racks are beyond 150% over capacity. Understanding the popularity of this area, we relocated the lot to the north side of the South Hall building in order to fit more racks and make it easier to park your bike before class.The project was completed in summer 2012.

The installation of 7 Dero bike air pumps. These stands don’t interfere with parking provide easy and accessible maintenance for bikes around campus. Their yellow color makes them easily identifiable. The stands were made by the ASBC, themselves. These pumps were installed in September of 2012.

On November 1, 2011 the ASBC approved $32,500 to expand the lot on the North side of the music building. Recent lot assessments showed that the lot, with 236 spaces was over capacity at 134%. The ASBC installed peak racks at the lot, which added 233 more spaces and increased the capacity. The lot expansion took place over the first couple weeks of Winter Break and was completed before the Winter 2012 quarter starts.

After request from the grad students in the Chemistry department, the ASBC approved $5,000 to install peak racks at the Physical Science Building North (PSBN). This project was completed over winter break and was finished by Winter quarter 2012

During Spring Break 2011, the ASBC completed a project that expanded the capacity of parking at the Rec Cen from 260 to 456, as well as completely re-organizing the layout. The project could be completed thanks to the Rec Cen governance board, who matched the $25,000 approved by the ASBC.

Over spring break 2009, half of the old racks in the Campbell Hall bike parking lot were replaced with new Peak Racks. The rest of the old racks were over summer 2009. Peak Racks, which are manufactured locally in San Luis Obispo, allow for higher density bike parking than traditional bike racks. The complete rack retrofit will increase the lot’s parking capacity.

After more than a decade planning, bidding and construction delays, the Broida Bikeway finally opened on Wednesday, February 1st, 2006.

The Broida Bicycle Path is an east-west connecting link for the campus. It connects the bike path by Chemistry that stretches around the northern perimeter of the main campus with the path near Davidson Library, thereby increasing access to the east side of campus. Funds for construction were raised through the ASBC initiated student wide lock in fee.

Now students can legally ride their bikes down the Broida corridor to their classes without worrying about receiving tickets. Also, the area around the bikepath has been beautified making the ride more enjoyable.

Before the redesign, Goleta Beach bike path was a worn-out, narrow and dangerous bikepath with blind curves and potential for pedestrian-bicycle conflict. On the downhill ride, the pump station fence jutting into the line of sight created a blind spot at the sharp curve on the bikepath and made it a hazardous place for both bicyclists and pedestrians entering or leaving campus.

Goleta Beach bikepath improvement project realigned the path around the fence and increased visibility to bikers descending the path and provided a safer paved area on the side for pedestrians reducing the chance of collisions with bicyclists.  The change improved a total of 888 linear feet of the bike path between the pump station and the East Gate entrance. The project also widened the path to 14 feet and relocated 225 linear feet of the path a few feet from its current location adjacent to the pump station to remove the “blind spot.”One year after the redesign, the path was slurry-coated to reduce the wear and tear and prolong the life of the bike path. Now commuters to UCSB can safely and comfortably ride to campus without having to stress about the blind curve or pedestrians on the path.